This was my second time doing this race, which had its inaugural running last year. This year, I ran it solo, but my husband and daughter were there at the start and finish to cheer me on. We arrived shortly after 8am and it was cold (46*), sunny, and windy.

The course was the same and is described as “gently rolling” hills following the first major hill up Castle Hill. It is a pretty, but challenging course with limited traffic on mostly country roads.

Pre race, there was limited communication via email and Facebook.

same shirt as last year, so no date or year,

no timing chip in bib

About half way I thought I was doing okay because I was on track to beat 1:43, but I quickly realized that my time to beat was 1:34. At this point, I became discouraged since I did not think I could get a PR. Later I realized that there was a chance of beating my previous time, so I started to speed up around 8.5 miles. It was hard for me to pick up my pace but I did try to. mile 7 was my slowest and mile 10 was my fastest.

Post race, there was Smuttynose beer, Hint water, Stoneyfield yogurt, water, and pizza. We grabbed a few things and left.  On our way home, I checked my 2015 results and compared them to these results. I realized that I had to compare gun times and that is whe I realized that I had gotten a PR! 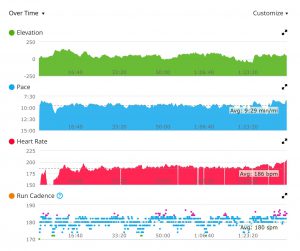