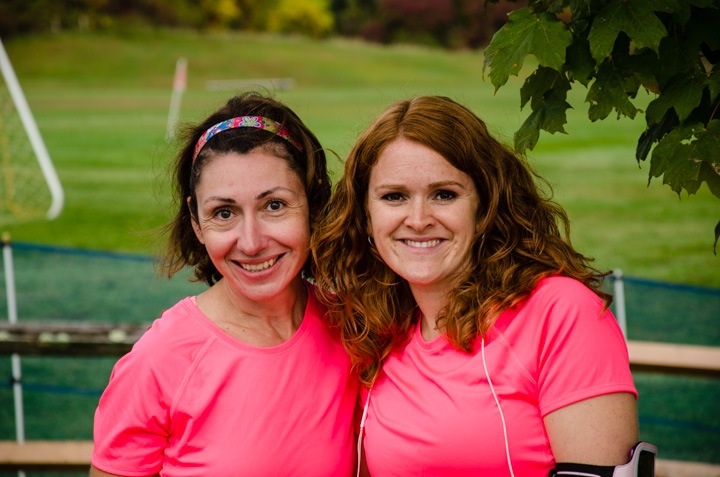 On Saturday, October 5th, I ran my first relay race with my friend, Erin. We were both excited for this race and decided to buy matching outfits at Old Navy. Our team name was The First Timers.

We picked up Erin and her daughter [Brenna] around 8am. There was a lot of nervous energy in the car and my stomach was upside down. We arrived at Hollis Brookline HS by 8:45 and decided to wait in the gym, where it was a bit warmer than the weather outside. I had picked up our bib numbers and t-shirts the night before, so we just hung out and chatted with another fellow runner, Heather.

We took one last potty stop before heading outside to bid Erin farewell. She had to get on a bus by 9:45, to head to the relay point, while I headed to the starting line.

Our time started with gun time since I did not have a timing chip on my bib. I lined up towards the front 1/2 of the pack and set out to try and get the best time possible, so that my partner had a good time to work with. I chose to do the first leg [6.4 miles], which was the “easier” of the two parts. Aside from the one long downhill, the rest of my leg was flat with some rolling hills. The first 2 miles looped back in front of the school, so I got to see my cheerleaders.

At mile 3.5, my left shoelace came undone, which forced me to stop an retie. Everyone says that you should not try anything new on race day and you would think I would have learned my lesson after my 5K in march, but I did not. At about mile 4, I decided to have an energy chew, which proceeded to stick to the roof of my mouth as I tried chewing it. yuck!  I ended up scraping it out of my mouth and throwing it our. Then, I stopped for a few sips of water (something I rarely do, but with the sun/heat and the chew incident, I needed it). My a RunKeeper app GPS was off and had me achieving mile markers before i was actually there, because I was not sure which timing mat was the official start.  i really pushed it on my final stretch and knew I had achieved a good time. when I reached the relay point, Erin was ready to go. I tapped her, wished her luck, and off she went. My app had me doing 6.49 miles in 59.18 for an average pace per mile of 9:08, which I was very happy with. I waited for our friend, Heather to pass the relay point before heading to the bus to await the ride back to the finish line. Erin did great and I was so proud of our team. I would definitely do another relay race. Having someone counting on you is extra motivation to push yourself just that much more.