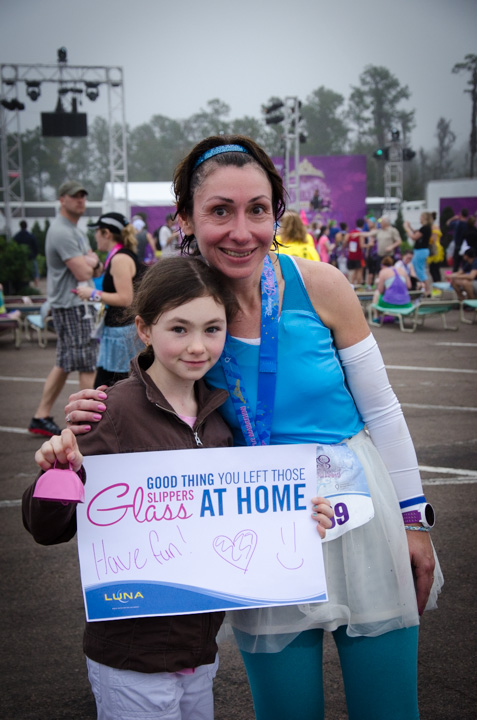 On June 6, 2013, I registered for my first 1/2 marathon, just 9 months after starting running. I got it in my head that my first 1/2 would be the Disney Princess 1/2 marathon in February and with a few clicks, I was registered for the most expensive race yet! For the next several months, I worked with a Disney travel agent on lodging, dinner reservations, and park tickets. I can’t say enough about Regina who helped me plan the perfect 4 night getaway. During the summer months, I searched for the perfect training plan. I wanted to train well, but knew what would be feasible to do, given my work schedule and family commitments. I settled on a 16-week training plan for beginners found on www.musingsofahousewife.com. Week 1 started on November 3. My training typically consisted of a run on Mondays, Wednesdays, and either Fridays or Saturdays [long run] with an occasional Sunday short run as well as spinning or yoga on Thursdays. I converted the online training plan onto printable monthly calendars and traced each and every workout [I’m a geek, like that.].  Starting in December, most of my training took place indoors. I started on the track, but switched to the treadmill, once I discovered that the key to the ‘dreadmill’ was to change up the pace. Our very difficult winter in New Hampshire forced me to remain on the treadmill until race day. We flew to Florida on Thursday and the race was on Sunday, Feb. 23, 2014. After checking into Port Orleans-Riverside, we headed to the Run Disney expo at ESPN Wide World of Sports.  Inside, we picked up my bib number and t-shirt and found many vendors. I discovered http://www.oofos.com/ and met Sarah from http://www.anothermotherrunner.com/. I must say that this was the highlight of my night.

The forecast was for high humidity and temps in the 60s at start time. I prepared everything on Saturday night before going to bed around 10.  Two different alarms were set for around 2:15am. Buses started running at 3 and I was out the door and heading to the lobby at that time. By 3:15, the bus was leaving Port Orleans-Riverside and heading to Epcot. The ride was short and quiet, but there was a lot of energy in the air when we reached the Epcot parking lot. After looking around for a bit, I headed over to watch some entertainment – a fairy godmother in training, who was hilarious. I had no bag to check, so I just milled around, used the porta-potties, and people watched until it got close to race time, when we all started moving out of the lot and onto a road. [I have no idea where I was going, but I was following everyone else.] It felt liked we were walking forever before we reached the corral area. After one last pit stop, I entered corral D, which was the 4th one from the start line and stage. 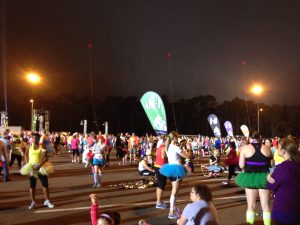 There I waited and people watched, until the countdown began. Each corral was sent off with a magical send-off by the Fairy Godmother as well as fireworks. I was so excited but was telling myself to go out slow and had planned my playlist accordingly. It was dark and foggy when we set off and it misted for much of the race. I used my Garmin Forerunner 220 as well as my HR monitor, so I have lots of stats.

Avg HR:186 bpmMax HR:208 bpm Time seemed to pass quickly because there was so much to see along the way – everything from bands, characters, volunteers, signs, kites, etc… Many people had given me advise to enjoy the experience and take it all in – so I did. I stopped to take pictures as well as have pictures taken of me and used the real bathroom at MK.  My favorite moment of the race was entering Main St. and running through the castle, where I had plenty of room to move freely. It was truly magical to see all the family and friends waiting and cheering on their loved ones, but my husband and daughter were in the wrong place at the wrong time and failed to see me anywhere on the course.

After I finished at Epcot, I waited for my husband and daughter to join me. I was wet and sweaty, but surprisingly feeling pretty good. After changing into my flip flops, we hopped onto a bus back to the resort to shower and head to MK for breakfast.