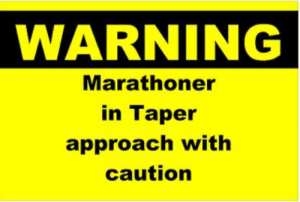 Monday – fun workout – I decided to go to yoga at the Y, since I had not been in a while. WOW – was I tight!

Wednesday – 3 easy miles – I did my usual loop in the neighborhood and felt great. pace @ 9:48

Overall, this was a good week with only 3 days of running for a total of 21.1 miles.

Thursday – 3 easy miles – on the treadmills – sore and tired knees

Sunday – Long run – 20.25 miles – The weather was perfect although a bit chilly at the start – sunny 52* and 66% humidity at the start – sunny 68* and 38% humidity at the end.  I fueled every 3 miles [Cliff gels and shot blocks as well as Sport Beans] and used Gatorade Endurance [lemon-lime]. I felt amazing on this run and unlike my last 20 miler, I did not have multiple stops to chat with hubby or a bathroom stop. I only stopped once with 4.5 miles to go when I ran into Brian who was at the beginning of his run. My ankle, lower shins, and knees were all fine. I wasn’t feeling great at the start due to some cold/allergy symptoms, but the run seemed to actually help the symptoms. I finished my audiobook – If I stay during part 1 of my run, listened to AMR podcast 2 and 3 during parts 2 and 3, and listened to music for the last part [4].

This week was a cut back week and I only ran 3 days for a total of 16 miles. I did do yoga twice and had 2 rest days. I definitely listened to my body when I came to Friday.   I had woken up with such a bad sore throat which only got worse throughout the day. I was exhausted after working my first 5 day week since school is back in session and decided not to run an easy 3 miles. By the time I got home, all I wanted to do was lie down, which is what I did. For those of you who know me, you know that is not like me.  It was the right decision and I woke up on Saturday feeling much better and had a great run. I only took my hand held water bottle with NUUN and no other fuel since I was only doing 7 miles.

I continued testing my new sneakers on the treadmill for the first 2 runs. I had initially just switched out the inserts from the Ride 6 to the Ride 7, but the shoes are different and the fit was off. I finally decided to switch out the inserts and put those from my New Balance in the Ride 7. Good news – they work! I finally decided to use them outside for my long run and had no issues. I am glad I have the next 5 weeks to break them in.

A Whopper of a Week‏

[and I’m not talking about this kind of Whopper]

I have to admit that looking at this week’s training plan made me a bit anxious. I had to run 5 out of 7 days, work 4 out of 5 days, and complete my longest run to date on the same day that we were going to the One Direction concert.  Having Monday off helped with rescheduling the 8 miler from Tuesday. With it getting darker earlier these days, I would have had to run on the treadmill, which I did not want to do.  I ran 2-3 milers using my new Saucony Ride 7s on the treadmill. They feel quite a bit different than my Ride 6s, but I am hoping it is just a matter of getting used to them. Nothing hurts. It’s just that the insert feels like it does not quite fit right.

The big deal this week was my longest run ever — 20.1 miles @ 11:29 pace [vs. 12:08 pace for 18 miles]. I followed Dimity’s advice to not stress about the long run too much before going because the more energy you put into worrying about it, the less you have for the run itself. I prepared my typical old fashioned oats with hemp hearts, chia seeds, coconut, and almond butter and had some coffee. 30 minutes later, I left for the rail trail in foggy, misty, upper 50s weather.  I brought along my Nathan hydration pack filled with water, Sport Beans, and Cliff Shot gels. Lately, I have been trying really hard to run by feel, rather than watching my Garmin. I do look at each mile marker when it beeps at me.

The weather remained overcast and cool for most of my run and only cleared up during the last 30 minutes. My long run was made a bit shorter by running into my husband 3 times. This gave me an opportunity for quick check-ins.  He was riding for 4.5 hours. I set out with the mindset of 10 out and 10 back. I started where I normally start and made it to new territory. I really had no physical issues, except for some left knee pain at mile 12, which passed within a mile. I fueled at miles 3, 6, 9, 12, 15, and 18, which is different from what I have been doing. It worked!

I managed to do the second half faster than the first half. 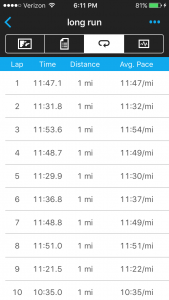 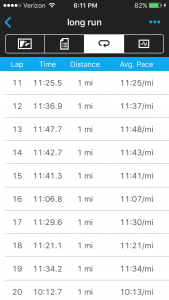 I can’t believe that 2/3 of my training is now complete! 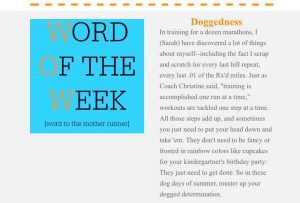 Monday – 88* – After having no issues with my ankle at work today, I decided to go for 3 miles. Again, my lower legs/shins were sore/tight but loosed up after the first mile. It was a slow one with an average pace of 11:50.

Tuesday – 84* – After dropping off the truck for repair, I opted to run 6 miles local and forgo the drive to the rail trail. I had the same issue with my legs, and again was slow [11:23] but not as slow as on Monday.

Wednesday – rest – Today was the first day of school for my students and a busy day for me, so I decided to rest. I also had an unexplained bruised left big toe, which I iced – so weird.

Saturday – 55* – long run on the NRRT- This was probably one of my best runs. I was able to run the second half faster than the first. I fueled at 30 and 60 minutes and did not drink much. The weather was amazing! I ran into my husband while he was out for his 4 hour bike ride. My average pace was 10:41 for the 10 miles.

Sunday – rest – We played 9 [actually 10] holes of golf as a family at Brookstone Golf Course. 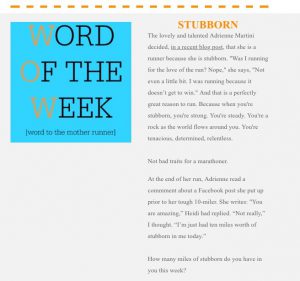 Tuesday – Today’s evening run on the NRRT was an 8 mile negative split second half. I started out a little bit faster than I should have which made running the second half faster more challenging. Average pace: 10:29

Thursday – long run onNRRT – quick stop to pee at Rite Aid – saw Brian who was out on his long bike ride – fueled with gels and beans – mile 16 was my slowest – last 3 miles NS – left ankle felt week and had some dull pain which subsided – I was tired at the end, but who wouldn’t be. My longest run ever went really well. Total mileage 18

Friday – NYC sightseeing – We walked 10.5 miles. I wore my Skechers sandals and did not have any real issues, but my quads were sore.

Saturday – NYC sightseeing – We walked 11.5 miles. I wore my Skechers sandals and felt like my left knee had fluid in it and my left ankle started to be funky again.

Sunday – Rest – I opted out of running an easy 3 miles today since my left ankle continued to bother me. I am hoping that ice and some rest will do the trick.